The Final Word on The Last Story

After years designing games Hironobu Sakaguchi had arrived at a crossroads at the start of the production process for The Last Story.   “I just felt like I was at a slightly different point from everyone else. As if I was surfing alongside the others, but had ended up riding a different wave from the one I should have aimed for,” he admitted to Nintendo president Satoru Iwata.  “This project came about just at the moment when I was becoming aware of this,” Sakaguchi added.  “That’s why, if I'm honest, I feel a real sense of gratitude towards this game.”

His first game as director in 18 years,  The Last Story is not a typical Sakaguchi game.  “We knew that we wanted something that differed from the way things had been done before. We wanted to express the game world and story in a whole new style.”   The result is a more modern take on the Japanese RPG, with elements borrowed from western RPGs such as branching decision points.  That said, The Last Story is not an open world exploration role-play[ing] game. It remains a story-driven game in the classical Sakaguchi style. “I’ve always attached great importance to the story,” he noted   “It was no different with this title.”

Sakaguchi however did go in different directions in the structure and focus of the story. The game is an episodic fantasy with many chapters that can be played out of order, bound by an overarching narrative of war, friendships, intrigue and betrayal.  The game offers a vignette of events at a crucial turning point in history at a place called Lazulis Island and the player is dropped in-media-res with a band of mercenaries on their way to meet the island's powerful Count.  The game alludes to a wider world where a human empire won a decisive victory against a another race of humanoids generations ago at a high cost. This is a world in which Lazulis Island is a key player, but only just a player.  Yet the story remains focused on the island and its surroundings. The world-spanning Final Fantasies are condensed into a single city of Lazulis, a city worthy of a massively multiplayer on-line game.  While it does not share the world maps of other Final Fantasies, it is in a way a far more intimate and richer game than any of Sakaguchi’s previous efforts. Quests abound, storylines interweave, and the winding alleyways and side streets all come together to create a living world.   It is this Majora’s Mask-esque familiarity with people and places that really works to the game’s favour.

Despite having what may on the surface appear to be a typical RPG plot, it manages to engage in a way many other RPGs don't.  At its core, the game is a human drama as much as a struggle of the forces of good against evil.  Whichever side wins is less important than the person who wins the victory.   Virtues such as avarice, ambition, courage, love, temperance and honor can be found in nearly every character in the game.  The band of mercenaries the players lead are hired to fight in a racial war.  There are echoes of Chrono Trigger’s racial dichotomy of an oppressive human kingdom discriminating against non-humans.  The leaders of the land are torn between ambition and duty to protect the people, and in this tension the script weaves an excellent narrative and character arc as key characters sought to combine their ambitions, motivations and their duty to advance their own interests.

While the turncoat or the morally conflicted character is not new to the genre, the way in which Sakaguchi and his script throws the players knee deep into this duality is fresh.  There are entire segments of the game where there are no good choices. And in order to proceed, the player must choose the lesser of two evils.  Making a less than desirable choice knowing the alternative is ruination of the kingdom.  In the back of the player’s mind, we know the decision is not right, but we are taken for a ride anyways. In the end, the script finds a way to extricate the hero out of the moral quandary. However, the tensions between doing what others expect of you and what you know to be right creates the core of the game’s narrative conflicts and plants seeds of an emotional journey that reaches right into the Epilogue, aptly titled "The Last Story".

This is a notable achievement for a game that is essentially linear with many dead-end choices.  Despite this, I rarely felt a decision was forced to serve the game, the decisions that progress the game serves the overall narrative arc and enriches the overall experience.  It makes the revelations  to come even more bittersweet.  It is also this play on human drama rather than a focus on lore or an overwrought mythos and backstory that makes this game enjoyable.  There's not a lot of high-fantasy babble and convoluted plot lines. The story is far simpler, but just as rewarding because of its emphasis on human drama. From Sakaguchi’s point of view, the fantasy setting is merely a vehicle for the story.   By giving the world at fantasy setting, it is “actually easier to bring out realistic human dimensions in a fantasy setting,” Sakaguchi explained. 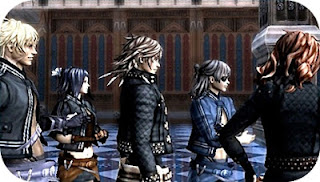 It’s worth noting the top notch voice acting done for the English edition of the game. With a cast of BBC actors, the leads played by Jack Ryder (Zeal) and Alix Wilton Regan (Callista) fit the part with subdued neutral voices that almost anyone can identify with.  Kelly Wenham (Syrenne), Daniel Curshen (Therius), Nico Lennon (Dagran), Montserrat Lombard (Mirania) and Derek Riddell (Lowell) are perhaps the strongest of the bunch as the voices of the game’s supporting characters.  Wenham’s Syrenne is particularly well done as the peppy, ‘nothing will get me down’ party member that by the end of the game, I have grown fond of.  This also makes her moments of weakness even the more poignant.   The ancillary voices too are top notch. There’s variety and life in the sounds of everyday life in the city of Lazulis.  They curse when the player bumps into them while walking on the street. Later on, the same citizens will apologize profusely  and praise the player when the player has become much more well known.

Taking a cue from the real-time battle systems of Final Fantasy XI and Final Fantasy XII, Sakaguchi’s battle system blends the strategic with fast-paced action where it feels more like a hack-and-slash ARPG than a RPG.  “I would say it’s all about order and chaos” noted Sakaguchi.  “In battle, the side that manages to impose ‘order’ on the battlefield will secure victory. Or to put it the other way round, disrupting the ‘order’ of your enemy so it degenerates into ‘chaos’ is the key to victory. That’s something I wanted to express in the battle scenes in the game. But I didn’t want this to be achieved in a logical, methodical manner like Japanese chess. I was looking for a more intuitive battle system in which you can feel the flow of time.”

The result of this innovation is the emphasis on strategy and placement of enemies and kills orders that is more deliberate than the lock-on-target and whack away real-time battle strategies in the recent Final Fantasies. As a result, some have suggested The Last Story’s innovative battle mechanics is perhaps something the Strategy-RPG genre can look to in place of the deliberate and contemplative turn-based combat mechanics popular in the genre.

In an unusual move, Sakaguchi further emphasizes the flexibility of his battle engine by inserting an on-line multiplayer mode, allowing players to replay the game’s many boss battle with several other real people over the internet in a co-op mode or against each other in a deathmatch mode.  Winning reward players with special weapons and craftable materials that is otherwise unobtainable or difficult to obtain outside of the game’s story.  All loot earned can be used in the single player game.  With a New Game+ mode allowing players to carry over their levelled up characters, weapons and armor into a new adventure with more difficult enemies, there is a special demand for the rare craft materials that may only drop once in the entire game to power up certain armor and weapons to +99 ratings.

In The Last Story, Nobuo Uematsu reprises his role as the composer to a Sakaguchi epic.  While many of the compositions are ‘typical’ Uematsu fare, the overall soundtrack is quite well rounded.  The main theme "Toberu Mono (Those who Can Fly)" is sufficiently sweet to evoke the right sort of emotions.  It’s the kind of melancholic theme Uematsu is famous for and compares favourably to "Theme of Love" (Final Fantasy IV) and "Melodies of Life" (Final Fantasy IX).

Uematsu’s best work in the soundtrack is a piece that is played near end of the game, likely forgotten in the shuffle to get to the ending for some, and for others, in the depths of an emotional  gut punch.  A piece titled "New Days", an extended version of  a violin piece called "Bonds", the music serves as the bookend to a narrative journey.  Starting with a minimalist piano, it builds to a crescendo before receding back into a melancholic end.   "New Days" is a theme about moving away and moving on to new beginnings where old bonds end. 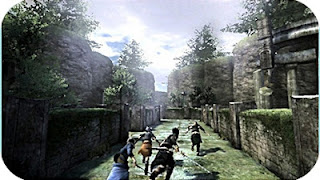 Uematsu affirms his unique approach when speaking about The Last Story. “For this title, I put aside the rulebook...my priority was to create a certain atmosphere... The music isn’t there to help explain or underline what’s happening on screen. Rather, it exists as another kind of sound effect. There is a unity between the persuasiveness of the images and the power of the music, and I think they fit together in a very natural way.” On the subject of the soundtrack, Sakaguchi adds, “I feel that The Last Story itself changes as you listen to the music. That’s the power of Uematsu-san’s melodies. It’s not simply that the music is beautiful, it’s also the fact that his humanity comes across in them. They are instantly recognisable as his songs.”

Although parts of the game could have used some extra polish – There is a broken (though not game-breaking) quest in the mid-point of the game involving a chase through the city streets – The Last Story is a dazzling and beautiful game with a solid core of humanity.   Unlike Sakaguchi’s previous efforts, there is no massive marketing machine and brand solidarity to power opinion to the near unanimous praise his previous games enjoyed under the Square-Enix banner.  But as a long-time fan of Sakaguchi’s games, I feel The Last Story stands as one of his most unique and emotionally powerful works, even if it may not be his best.

The Last Story is Sakaguchi’s period in the long sentence of a genre he had popularized globally in the 1990s—The extravagant story-driven fantasy opera with archetypal leads, damsels in distress, heroic arcs and mythical beings. 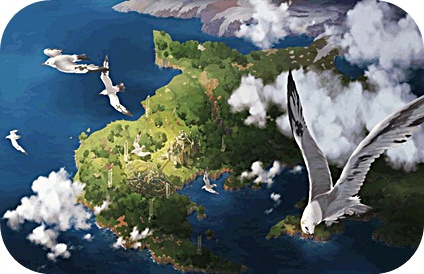 The Last Story (Wii) is published by Xseed Games in North America and Nintendo in Japan and Europe.
Posted by Dexter at 8:31 PM